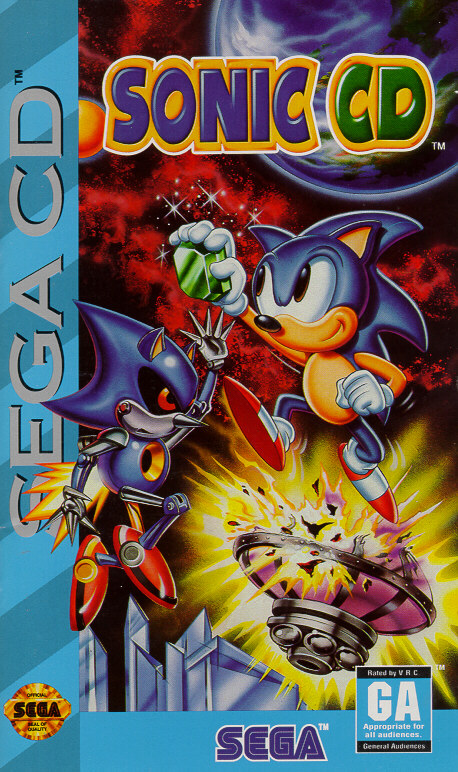 Sonic CD was launched on July 19, 1993 for Sega CD and PC. It has been not so long ago that I bought it for my own PC, and I have not been regeretting it ever since. It is a blessing to have such a classic within my game library. Along with it, it came 3 more CDs that included Sonic 2, Sonic R, Sonic & Knuckles collection. But none of the mentioned could ever compared to this gem on the Sonic saga. I even dare to say that I prefer this game over (gasp!) Sonic Adventures 1 and 2 for Sega Dreamcast.


Ah, do not get me wrong, I LOVE the Sonic Adventures in Dreamcast, especially the way Amy Rose and Rougue are so neatly designed, but Sonic CD was one of the titles that truly inspired me to keep collecting everything Sonic along the way.

This was one of the biggest reasons why I collected the game. You will not hear anything quite like this in any other game Sonic has been in. Yes, not even in Dreamcast. Each level's music would also change whenever you transported into the "Past" or "Future" sections of it. Dr. Robotnik's laugh everytime you confront him is something that is worth to a villain's BGM. I have even heard themes that never made it into the US version (Or rather...they replaced them with their own version), such as the mysterious stage called Volcano Valley. I am yet to find out if that stage ever was meant to be there or not.

The story of this game takes to the point between Sonic 1 and 2 (supposedly) for Sega Genesis. That maybe the why Sonic 1 sprites were used in the game, and the fact that you could dash the same way (almost) as in Sonic 2. It starts off as Sonic runs trough a semi-deserted wasteland, passing trough rivers, cliffs, and gliding trough the air. Before him stands a large floating planet that is chained down to a cliff near a lake. Sonic dashes forwards it, jumping and holding into the links, until he is no longer seen, vanishing into that chained planet...

Not much of a story provided from the cool animation short at the beginning of the game, but for the most part, Sonic CD was better left at play mechanics than making sense of a story line at the time.

Everyone on the gaming world knows Sonic. Everyone knows his name is on the games and on many Sega-related merchandise and titles. He needs no introduction. He is one cool Hedgehog that runs around destroying Dr. Robotnik's plans for world conquest (and world pollution). In this story he must save Mobius once again from the mad scientist's intentions while dodging a new breed of enemies (including the all cool looking Mecha Sonic), recovering the Time Stones , Savig Amy Rose, and travelling trough time to preserve a good future. (Where have I heard this before...)


Sonic made his debut along with the Sega Genesis system, in Sonic 1. He was the answer to Nintendo's Mario Bros.

Ever since his first videogame, Sonic has been on numerous Sega games, cameos, merchandise, and even his own Cartoon, both in Japan and America.

Next up, the main baddie of the game, Dr. Robotnik himself. He is the one responsible for unbalancing the eco-system of Mobius in every single game Sonic has appeared in, and without him, there would be no villain to battle in this game. Using his array of machines and traps, he hopes to slow down the Hedgehog to achieve his dark dreams. In Sonic CD he was updated with a different set of ships and sprites to match his moods, especially when being hit by Sonic. The origin of this guy is a mistery, but he was around ever since the first Sonic videogame came out, making Sonic's life miserable...or vice versa.

Newcomer to the Sonic series is Amy Rose, who played the helpless victim in Sonic CD. She started as a fan for Sonic, following him everywhere he went until she was captured by Metal Sonic, luring Sonic to a trap. Amy has made numerous appearances since then, including in games like Sonic-R (Sega Saturn), Sonic Shuffle (Sega Dreamcast), Sonic Adventure 1& 2 (Sega Dreamcast), and lately, in Sonic Advance 1,2, and 3(Gameboy Advance).

Her looks changed drastically, making her more like a Mall shopping teen, but she still has her cutesy look.

Ah yes, the ultimate Mecha Sonic ever created. Metal Sonic's powers inclded making a forcefield to destroy spieks (and sending them to Sonic for that manner), Electric Shield that made Sonic have a hell of a time to pass by him, and the ability to mock Sonic with his own personality. This is the design I aprove of it so much, Sega did a wonderful job of upgrading this character from Sonic 2. Sonic battles him while racing trough Stardust Speedway, at the same time that Dr. Robotnik is close behind, shooting a wall of laser to eliminate him. His ending is quite saddening: He smashes into a wall. All in all, this is the best Mecha Sonic ever designed.
Metal Sonic made his debut on this game, later making appearances in Knuckles Chaotix (Sega 32X), Sonic Comics, and in Sonic The Hedgehog Anime.


Sonic CD featured many enemies that I have yet to see in all of his Sega Genesis' incarnations, some with saw blades, others like Praying Mantis throwing out blades, and those UFOs that fly ion the special stages. Robotnik's robot designs are great, I liked the first boss on Palmtree Panic, a full motion mechanoid, while in some in others he may go as simple as a running treadmill to try pushing Sonic to a barricade of spikes.

Aside the spectacular soundtract, Sonic CD provides the player with the first animation of our blue spiked hero. He runs, jumps, makes daredevil moves around the screen. The endings are also hand-animated, which is a treat to see. There is even a pencilled animation in the game, where the designers made protoypes for Sonic on the intro. Among the bells and whistels in the game, you can even reduce Sonic into a midget in Metallic Madness Zone, clever way to go trough a machine-ridden city I say :p

Also, there is a lot of hidden goodies in it like art and stages that you can access via the sound test trick.

But jus tas there are good points, there are a few bad...
The controls are at times difficult, you may have to wait a few seconds to let Sonic charge up and go as a ball, whereas Sonic 2 you would spindash with no problem. Jumping can be a problem as well. Some stages have sloppy graphics, at times is difficult to see where you are, and the background blends with the srpites most of the time. The sound at some stages like Metallic Madness are way too HIGH, specially the chainsaw machinery. I had to cringe and puse it just to lower the volumme whenever they appeared there.

Volcano Valley: Missing in action? I have heard a track where this title appears, even so, the little planet has a volcanic area drawn into it as well as some desert cacti around. Perhaps there were stages where they were cut in the final realease, since it may of taken a lot of space (Also rumored that at least half of Sonic poses and sprites...including....swimming were cut in the final version). I am wondering if that stage is stil lup, and its just missing...
There was some beef about the Japanese soundtract being omitted in the US version as well, but I still believe Sonic CD had the best BGM in any platform it came out as.


All images here are © Sega Inc. Sonic CD, Robotnik, and all characters mentioned are as well. Have a safe journey.