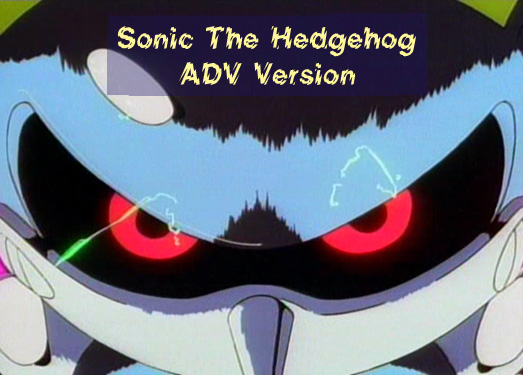 In 1994, I picked up EGM Magazine, being that it had a huge article about Sonic the Hedgehog, and the cover featured the ever popular Sonic CD game, which was also featured on magazines like Diehard Gamefan and Gamepro magazines, the reason why I picked EGM at that tome was that the magazine had a special treat for readers, with over 300+ pages chokeful of videogame goodness, and because it had the biggest section devoted to the blue rodent. Games coming to the Gensis, Gamegear, Sega CD...everything and artwork featured that wasn't on the videogame covers and could at the time, only be access it by this type of periodicals. The magazine also celebrated Sonic's origins as well as merchandise featuring Sonic Cola (which made not had sold in the US for all I know), and something highly special as Sonic CD itself: The announcement of Sonic toons to come.

I finally got ot get a VHS copy of said Anime, and popped in to see just how faithful was to the game series, and if it could actually compare to the American versions of Super Mario Bros. cartoons and the like. Although the movie was only two episodes resembling a pilot of sorts, it featured enough referencs to keep me hooked. The rings seemed to be missing here, but I actually disn't seem to mind to notice, the same went for Chaos Emeralds and other knick-knacks Sonic Games featured in terms of items.

What was included were bits and pieces from previous Sonic games, anythuing from Sega Genesis versions to Sega CD-esque scenarios. Characters featured besides Sonic, Tails, and Robotnik were Knuckles, who had been recently added to the Sonic ffamily at that time, and who sported a cool pair of shades and fedora complete with a made-up accent resembling an Australian with a cold. Knuckles seemed to be more of a buddy here than what he showed in Sonic 3 just as well.

Then we have other characters I neer heard of, including a drunken owl who is a messenger from a King that rules the planet (hilarously named Freedom), who has a daughter represented as a catgirl who has th hots for Sonic, which I wasn't surprised to notice. Their appearances do not affect the movie too much, abnd soon you start to dismiss them as Sonic does battle against Dr. Robotnik, who is represented as the maniacal jolly good round fella that haunts you in the games. Missing from it all was Amy Rose, who seemed to have just popped out of existance until her return in the form of a renowend panty-showing, mallet-pounding grrrl in Sonic Adventure.

The Artstyle is pretty familiar to that used in the Sonic CD cutscenes, making this an even more praised version of the Sonic adaptations. I also noticed that the voice casting was fairly different from the toon versions, and it did not hurt the picture overall either.

The Anime starts as the voice of Robotnik praises his latest invention, Metal Sonic while shown in detail with the ever glar on its angry eyes. After the title resumes, Tails is showing off on a jet over water, while Sonic chills on the beach, foreshadowing the lazy bum he turned out to be in Sonic X years later. After nearly crashing into them by the blind owl, he informs them that the King is need of their help (yeah, a King, many things left unexplained during this version of Sonic). As they fly on the Red Tornado (fthe biplane used on Sonic 2), they arrive on a Kingdom on the skies, inhabited by Robotnik who lays in wait with a small trap to test their abilities.

However, Robotnik explains he is not the bad guy this time, and that a dark entity, Metal Robotnik, has taken over, leaving behind a machine that could destroy the planet. Sonic is left with no choice as Robotnik also holds hostage the King and the Princess as means the assurance that he will do as told. Sonic and Tails leave with a device given by Robotnik to locate hjis fortress deep in the planet. When Sonic and Tails arrive, they are greeted by ruins of a modern city flooded and thunderstorms, which later reveal deep in the distance the place where Robotnik lives.

Although the story turns a turn for the simplistic, it was a a good adaptation of the game, better than most, and it was enough for me to give it a nod. A good Anime for all ages, in par with SatAM and a collectable for all rabid fans of the series, as well as for those looking to collect every single adaptation of a videogame into animated versions. It was just too bad that nothing more was done after that delightful version, although it led to create an adaptation of Sonic X later on down the road. If said adaptation was just as good a this one, however.