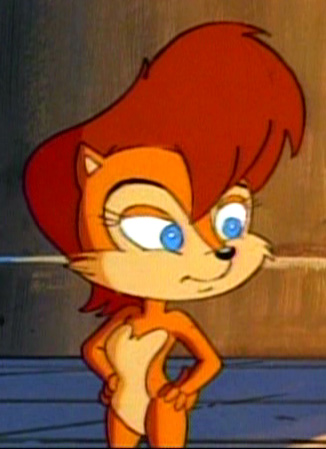 Gonna talk about one of my favorite animated princesses that has nothing to do with any Disney movie. Princess Sally became one of the most important characters in Sonic history to me, mainly because she represented a small group of cute animals who were fighting a menacing Dr. Robotnik to take back their planet Mobius, a fight which started one Saturday morning on ABC as I watched Sonic The Hedgehog for the first time. I was blown away on how serious and a bit dark this series was in contrast to the weird and amusing tone the Adventures of Sonic the Hedgehog had on a daily basis. It is hard to imagine how with just a game for reference the people at DiC entertainment could dish out such a rich, well written story fleshing it out and resulting in one of the most memorable videogame cartoons in history of animation. 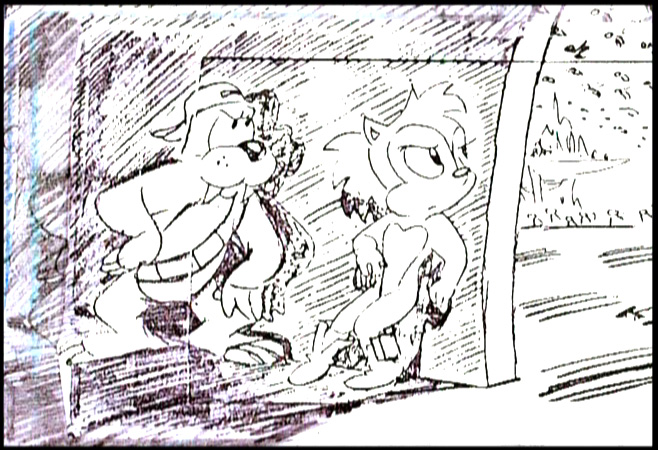 But I am here to talk about the often naked level headed and serious Princess of the animal kingdom, not the entirety of the series on itself. From what I gathered on the show alone, she was the sole heir to the Acorn kingdom when Robotnik took over, on her teens, wore blue boots, and had a compact computer named NICOLE which would help her while on missions to fight back the robot menace. I also learned she had a second name, Alicia, on one episode when she and Sonic went back in time to prevent said Robotnik takeover. I also know she has a nickname her father gave her when she was little, that of being called "BEAN" as revealed in another episode.

So what else was there? Surely DiC didn't just came up with the whole concept themselves, Sally would had been based off something within the Sonic mythology, or maybe not, but I had read around online, finding some things here and there which might of contributed on the creation of such an intelligent character that deserves more recognition that was given during the TV series' time in the air. What I am to decribe below is mere speculation, but I can assert that at least some parts of what could be the history behind Sally could well be connected.

I'll begin with her name, Sally Acorn, without royal additions. I am very damn sure I read that name before, in a manual from a Sonic game describing all the little creatures you managed to liberate from the robots as you cruise through missions in ye olde Genesis days. Each animal had a name, and when it pointed out to the squirrel, it clearly stated the name as SALLY ACORN. Now you may argue that this is a squirrel, not a chipmunk as Sally has been pointed to be, having then described as being a hybrid of chipmunk and squirrel being her father, King Acorn a squirrel himself. Nevertheless her name is printed in said manual, so I am starting off there. Reading on Sonic wiki pages and whatnot I find out that said squirrels were also referred to as "RICKYS," dropping any connections with the Sally of the animated series, but still being part within the entire thing anyway. 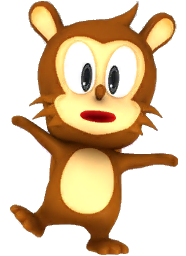 A Ricky as seen in former Sonic games.

So having this in mind, it is stated that the RICKYS helped Sonic to jump higher and move fast within the forests prior to Robotnik/Eggman invading their peaceful land, so we owe the squirrels for Sonic's training so it seems. I believe the RICKYS had also a part in Sonic's growing up in the forest, taking care of him as young, although this may be just speculation from the wiki pages and whatnot.

Moving forward with Sally's name, it was revealed that in the British Fleetway comis a Sally Acorn appears, and she is more or less a protagonist as well within said story, serving as a news reporter informing Mobius of Sonic's heroic exploits and Robotnik's rotten horrible deeds. Quite different from the Princess in charge within the American versions. Another thing to point out is that this Sally Acorn forms the Freedom Fighters here, so there is that similarity with Princess Sally in having the same role as leader here. 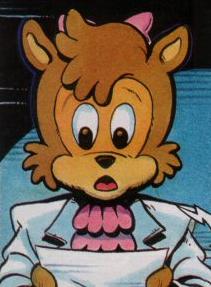 Another crazy bit of info I read from sites like Sonic Stadium and Sonic Retro is that the guys at SEGA would have Amy Rose called Princess Sally in order to coincide with the popular Saturday Morning cartoon in the awesome very past cool Sonic CD. What a marketing ploy, surely any kid owning the game and watching the cartoon would just shake their head at seeing Amy being called Sally. This was revealed in an issue of then running Electronic Gaming Magazine, which covered said game in 8 huge pages giving it as much hype as it could muster. I am happy to say I still own that issue and keep it as the treasure that it is. Anyway, the whole naming concept was soon scrapped just before release and the name Amy Rose was given to the cute pink hedgehog girl instead.

With all this popularity sorrounding Sally, especially after being witthin the pages of Archie Comics for a long time before SEGA switched the rights to IDW, you gotta wonder why she was not ever given the chance on being in a Sonic game or even have her own very game along with the rest of the gang from the SatAM show. Well, just like everything on that cartoon, Sally isn't REALLY a character that SEGA ever came up with, rather an American character to be in said cartoon and in the comics, however Sally and some of said characters DID make cameos here and there, and indeed she would appear in Sonic games at some point.

The only official appearance of Sally's would be in Sonic Spinball which was produced by Sega of America and without any association with Team Sonic overall. She and some other characters from the comic would show in a bonus stage where you had to rescue them within a giant pinball game. It wasn't much but at least fans would get her ANYWHERE at all. There were rumors that Sally would appear in a discarded Sonic game, first for the Sega 32X as Sonic Mars, then moving it to The Saturn, where it would take the name of Sonic Xtreme. The only things I could ever find out is that Sally would either be a background character having little to no interaction with anything on said game, or that they WOULD add her as a playable character. All in all, there doesn't seem to be any evidence written within the code of said discarded games, but if Sonic Team would come together with Sonic of America to make it happen it would've been such a nice shoutout to the cartoon overall. Finally there WAS a game planned based on the SatAM series, directly from the storyline of said cartoon. The only evidence is a very short video of showing gameplay of the discarded idea, having Sonic move around Robotropolis in a stealthy manner tossing rings at enemies and then confronting SWATbots before Sally shopwing up to open a door using NICOLE. It seemed tempting but the gameplay shown would probably turn off gamers being that they're used to having Sonic speed through stages without having to hide from anything. It also didn't state anything on Sally being playable other than appearing in certain situations. Meh. 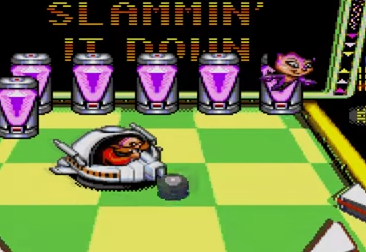 There is a way you can have Sally as a gaming character, even though its not official. Some hacked Sonic roms have Sally as a fully functional handmade sprite, where she uses NICOLE to sap enemies. She cannot do any of them spindashes but it is quite interesting to use her. although very difficult in certain areas.

Sally would also appear in other Sonic-themed stuff, such as in the Sonic Christmas Special, where she is buried under a ton of presents Sonic gives her and has no lines spoken whatsoever. That was sure a weird ass cameo considering that the entire thing was from the Adventures version and not the Saturday Morning one. A head scratcher if DiC wanted to make this some sort of requel to the SatAM version, but it would still make no sense given the stablished story on that version anyway. The sole thing Sally gives out is a gasp after being buried under said gifts, courtesy of Voice Actress Tabitha St. Germain. 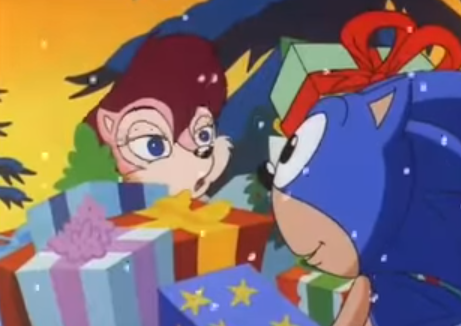 Another appearance by Sally would be in a Sonic children's book I once read in the public library, where it states how she met Sonic right after Robotnik's takeover. This would conflict with the stablished continuity in the series as well, being that it was stated Sonic and Sally knew each other since they were kids.

There's that tidbit on Dic planning a girlfriend for Sonic from the very beginning before it was decided who would end up being his main royal squeeze. A human girl named Madonna. Not much going into this, just adding everything connecting to Sally including her relationship with Sonic.

This is pretty much all I ever found about that intelligent and very favorite character I've grown to admire since the first time she appeared in a Saturday morning. Will Sally make a come back in the new line of IDW comics when Sonic launches? Well, hope so, although if they plan a complete reboot that might be a tad difficult to pull off. Still, having her around again would really be a neat thing in my opinion.

Sources for stuff written on this article page courtesy of Sonic Wikia, Sonic Stadium, Sonic Retro, and other places I have forgotten names of, but Credit them for my research.