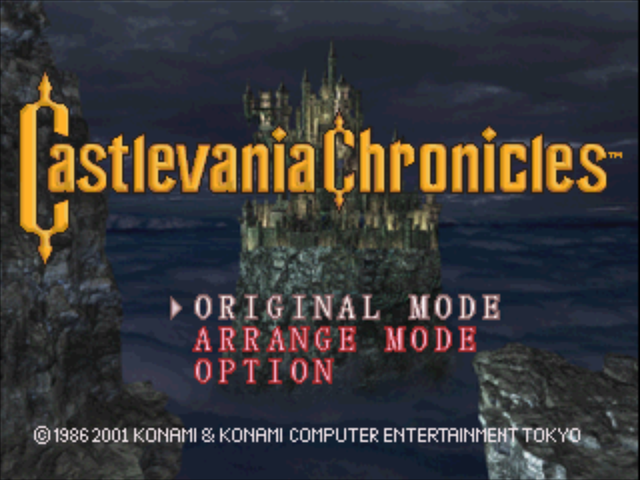 In Chronicles, Simon once again takes his kinky whip in hand to give Dracula some sexy time

Until it was decided to grace the US with Rondo of Blood on SONY's PSP, we would had to content with Dracula X just to pretend to know how playing that wonderful game would ever be like while trying to wash away the bitter taste in our mouths with Mountain Dew. This would not stop Konami from trying to make amends and in 2001 released Castlevania Chronicles, which is a port of the X68000 PC game released only in Japan on 1993. When I saw this at a Funcoland (sweet memories) I had thought this was a port of Rondo of Blood at first, but was not too disapointed with the fact that I had a port of another Castlevania game that was also just for them Japanese gamers while we were left wondering when we could ever get any of the fun.

As you may had guessed it this is yet another retelling of the first game with Simon taking the helm once again. The game has similar stages and music from the first entry of the series plus others before it and well, little else. Although some of its tracks are quite fantastic, there are some that don't seem to fit with the atmosphere of the game overall, even of you had heard them before. It is probably the way it was composed, I don't know, but it did not bothered me at all when playing through it. The port also features a rearrenged version which feels like the Richter mode on SOTN, and its remixed soundtrack is quite glorious to the ear.

The game also offers some tweaks in gameplay like the ability to have Simon whip in a diagonal way in both versions, as well as extra features like a gallery, interviews with creators, and a time attack mode which challenges you how long it takes to beat a stage. Beating the original game earns you a more challenging, more difficult second run for you to beat, something the arranged version lacks.

Overall is another reimagining of the first game in the series as noted, but still helluva fun to go through and the various other stages added to the classic ones are quite entertaining to go through...mostly. Boss fights can be quite a challenge, some of them unfair even, but this is classic Castlevania as you would expect.