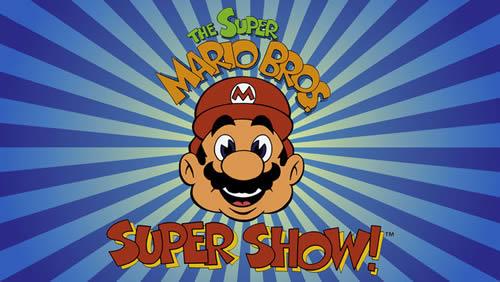 It was 1989 and Nintendo was at full swing in America. The gaming industry got its second wind after the 1983 crash and now every kid had the chance of not only playing a Mario game, but also seeing him in a cartoon show. I know, I know, Mario first appeared in Saturday Supercade as Donkey Kong's nemesis but it was when Super Mario Super Show started that he was a lot more notorious than in that other cartoon.

The Super Mario Bros. Super Show was divided into segments, one being the cartoon itself while the rest was acted in live action by legendary Capt. Lou Albano and Danny Wells, both playing Mario and Luigi respectively. On Fridays the Mario 'toon was replaced by The Legend of Zelda cartoons, which in turn had only 13 episodes going for it, having it on repeat while Mario continued being showed. The story is all shown on the cartoon's intro, having the Mario Bros. being sucked into a drain pipe and accidentally rescuing Princess (Peach) Toadstool from Koopa and his minions, all while Lou and Danny go on about in character during the entire rapped-out intro. Once the episode starts, shit gets weird. The live action sections deal with Mario and Luigi in some sort of predicament along with the character/celebrity of the day while the cartoon handles King Koopa and his evil attempts at conquering...some sort of place that barely resembles the mushroom kingdom. Both segment had this surreal notion to them and seemed to be just based on sheer parodical instances than focusing on anything that the game portrayed.

While the live action segments were taken as random and not having any sort of continuity, the cartoon episodes had a prominent premise of trying to get rid of the world from Koopa and his evil influence, all while taking shots at pop culture and parodying shows and movies. Some elements from the games were around, such as the flower and star power-ups and some enemies from the first two games. The cartoon was never in tandem with said games otherwise.

While this show was bizarre in all aspects, I thoroughly enjoyed every episode I watched as a kid and even had collected the entire series years later. The show itself leaves on a regular episode mimicking RoboCop and it did not have a real ending to it. The Legend oz Zelda which ended way earlier had the last episode done pretty much the same, never ending on a closing note to the entire televised series.

What I enjoyed from these series is how nefarious King Koopa really was. He was probably the best part of the entire thing.