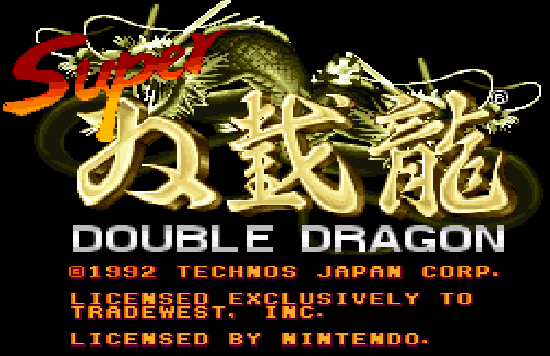 Double Dragon made a serious comeback with a vengeance on the SNES. Although Sega Genesis was granted the Arcade adaptation of Double Dragon 3, SNES doods got nothing to care about such silly discrimination. Super Double Dragon simply kicked part 3's ass to heaven and back, no matter which adaptation it was translated into.

Tradewest and Tecmos teamed up to release this indirect sequel to the Double Dragon series exclusively on the SNES. There was aneed for Double Dragon during the SNES' reign and fans were pleased to pick up their controllers and begin punching the daylights out of the punks who dared to miss with the Lee brothers on the 16-bit title. Although the characters moved like molasses, SDD made up mostly for its gameplay and ingenious array of attacks distributred with most of the joypads' buttons, which included most of the fighting moves from earlier games, plus a sweet block button which allowed to counter most enemy attacks, causing severe punishment in turn.

Although this game was sweet in graphics and control. it felt way too slow. The lack of running or otherwise moving fast (like in the Arcade version) was a bit annoying. That dissapeared after I got used to it, being able to think my next move while learning the patterns of every other guy coming at me. Guess the slowness was necesarily for this.

Now, the music played a big part in here as well, being that every stage needed something to get you going while smashing a guy's face with your knuckles. Some tracks are remixes of the very first DD game, which came to be a nice welcome among the rest of the soundtrack.

You will not encounter any worthy boss at the end of every stage unil you come across 3 stooges who are the main reason why the Lee bros. pummel their way th

rough. One of them, a fatty with a clown complexion comes at you doing the Blanka rolling attack. Of the big three, this guy was a pain in the ass. The worse thing? You have to fight him again in the last stage. It was not fun. The next on the list, Mr. huge coat, was just a pushover. I felt sorry kicking him around like a used soccerball.

The last guy, who is supposedly to be a member of the Lee dojo turned traitor, is a true pushover. Although he does have some flashy moves here and there, you will be amazed as how easy you can get rid of him, and before you now it, the ending rolls up thanking you for playing. That left me a bit dissapointed, but that may be the only thing that lacks besides the game moving a bit slow.

Although it doesn't have many options like extra men or continues, SDD is a great challenge, and a game that cannot be from anyone's calssic collection of brawlin' games.


BACK TO DOUBLE DRAGON!
BACK TO GAMING STUFF