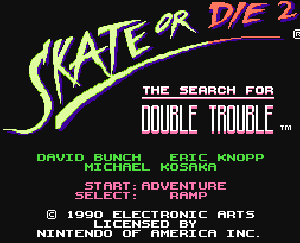 Skate or Die 2 succeded as a sequel with the greatest title screen ever. The music wasn't bad either, even when the voices were gurgled to hell. Sadly, this is about the only thing this game exceeded at from its predecessor.

"Hey dudes wazzap? Rodney here telling you about this hapless title which sent me to my death at videogame fandom, major bummer dude! So like, let's get going, I gotta go back to my skateboarding shoppe before my breakfast burrito explodes in the microwave, shaa!" 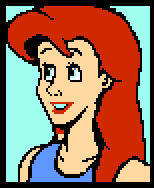 Unlike the first Skate or Die, there is no competition on different areas of skating, no challenges, and no two player co-op play. There is only you and your ability to toss eggs which explode on contact at other punks skating on the street, pretty much like any other kid would do if his skating rights were to be threatened in real life. There are however, a lotta weirdo characters, besides the "hero" of the game, including a girl who curiously looks like The Little Mermaid.

Here's our hero in all his moody glory.

The story starts with our unnamed hero (I don't recall his name but he is indeed very forgettable) skating without a care on the streets, where the Mayor's wife happens to be walking her dog at the same time. Some guy named Icepick distracts our bumbling hero and the dog goes "SPLAT!!" (no really, the sound effect clearly states so.) After you kill her dog she goes in a mad frenzy, demanding to the Mayor to stop all skateboarding activity in the city. You gotta fight for your right to skate dude! 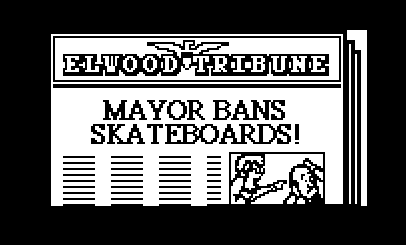 The only sport-like event ever in the game is when you press SELECT to practice on a U shaped ramp, you score big points and often get your head smashed inside the wooden structure a couple of times. It's too bad once you hit Reset your score and all that hard work is erased, being that there is no other option to get out of the Ramp mode without quitting the game. Duuuude. 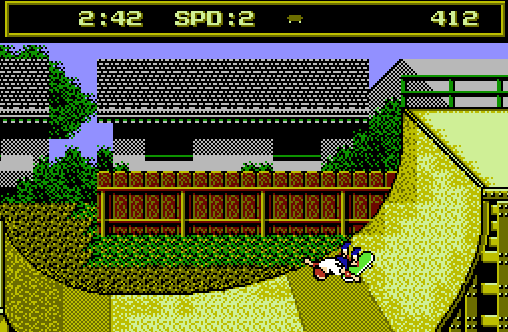 I was completely dissapointed at this NES game, given that it asks you to make fancy tricks with the mediocre control you already have in it, and the fact that I have to fight hopping gators with boxing gloves for a taco seems pretty much idiotic. Let the Mayor have his petty revenge on those skating punks, this game bums me out dude, like, totally.