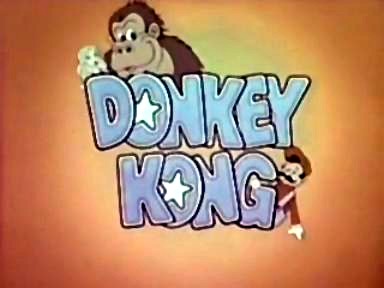 The very first time Mario ever graced the American TV airwaves was in the 80s on his Donkey Kong segment from Saturday Supercade which aired on CBS saturday mornings. This was aired along with other 80s arcade game adaptations like Kangaroo and Frogger, and would show up any other time along with Donkey Kong Jr. which took place in the same story associating with the huge woman-kidnapping barrel-tossing gorilla. Mario was voiced by Peter Cullen and would be accompanied by Pauline, both chasing Donkey Kong all across the world in an attempt to capture him and send him back to the circus.

At times Mario and Kong would tram-up against a common foe, especially if Pauline was the object of said team-up. More often than not, Pauline would end up being nabbed by Donkey Kong and it was up to Mario in rescuing her, all while the willy gorilla would make his escape yet again and to pursue him in another episode.

This segment along with the entire Saturday Supercade would last for about two seasons starting in 1983 and ending in 1984. As you might expect, this show ended with no conclusion whatsoever, leaving it open as Mario and Pauline kept on Kong's trail, lasting for 19 episodes total.

One thing to take nor is that Mario here pretty much resembles the one drawn on the cabinet itself, not the sprite used within the game, although he was also wearing his trademark blue overalls and red cap. Pauline in the other hand had a skimpy red dress and was blonde instead of brunette in said game, again, resembling the cabinet's artwork more than anything else, so was Kong.

This cartoon would never be paired up with later Mario TV shows nor even be mentioned, apparently Pauline just went on her own way once Mario and his brother Luigi ventured into the mushroom kingdom, I mean, she did come back on that Mario game and seemed to be doing well herself despite being his old flame.

Kong however decided to move into his own island far away from civilization as we all know if statements about Super Donkey Kong Country are passed as fact. As for DK Jr. well, being that he's supposedly the current Kong in continuity I would assume he did indeed find his dad and moved together to said island, leaving his human sidekick behind and never speaking of him again. Yeah, I know there is that DK tv show but I really don't want to bring it up here. At least not *yet*.