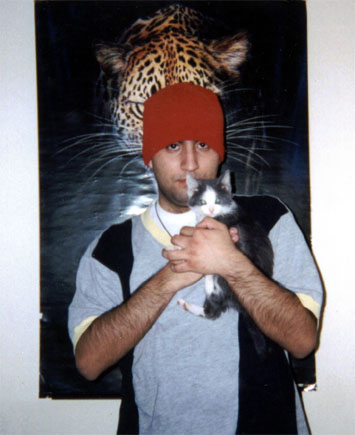 My cat was the first cat I ever owned. I found her meowing outside my apartment on a cold December night, so I guess that was my XMas present right there and then. As soon as I opened the door, the little ball of fur scampered straight towards me. She was a white coat with grey patches around her body, and all adorable. I was happy to have her. The cat would not like being held, always fidgeting and was a picky eater, always choosing canned food over dry, even though it upset her stomach.

I tried my best to take care of her, even paid for her treatement at the vet clinic nearby with the low amount of money I was being paid by the assholes I worked for at the downtown library. She would wait for me at the window, always looking outside to check whenever I arrived. I made a habit of taking as many photos of her as I could while I had her around. She was a very mischevious kitten, always knocking down stuff and even swiping at my hand to wake me up whenever I took a nap on the couch. She was growing fast too. She would stand behind my computer tower back then, being attracted by the sound of the fan running whenever I turned it on. I would take her away from it, afraid that she would get electrocuted or anything if she tried to swipe at anything.

Whenever Father visited my cat would rub along his legs, not minding that he didn't liked pets. Greg, brother of a friend of mine would make her It was pretty amusing to see her have a great time with strangers whenever they noticed her or not.

I spent money on bringing her to the local vet clinic, and would update her vaccinations and everything else with what little money I was earning during that time. She was a growing kitten, and would chase around knocking down anything I set up at a coffeetable including my chess pieces, or swipe at my hand when I took a nap on my couch. I never had such a happier time than owning any pet in my life and she was the reason why that was.

The time when I was fired from that cesspool of a library at downtown I had to move out and couldn't take her with me. I gave her to SPCA, a pet shelter and made sure she had all the documentation to make sure she would be taken cared of and kept safe until one day someone would adopt her. I am very sure she found a caring owner, and I pray that was the case.