For some reason, the title here reminds me of Castlevania 3. 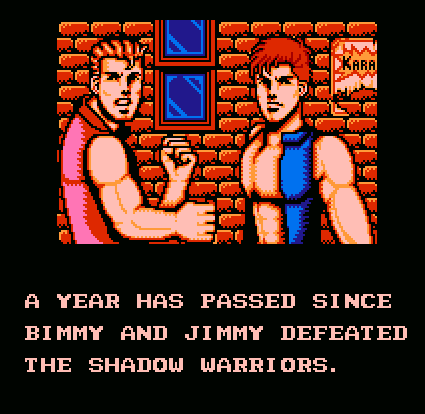 Double Dragon 3 was not as savory as its predecesors, it may be that instead of paying attention solely to a gilrfriend, gamers now had to travel aroudn the globe to collect 3 stones for a hag that wanted to reanimate a dusty mummy in Egypt. In the NES version however, you had to assist said hag AND had to rescue Marian once more for the third time. This was getting highly annoying, especially since the NES version seem to be just as bad as the Arcade in terms of plot. In terms of gameplay however, the NES version seemed to work pretty well, allowing players to team-up in moves like a double hurricane kick or launching your partner to an enemy. One player mode seemed as basic as it got however, although launching an enemy head first into the pavement is still pretty damn funny.

Storywise, Double Dragon 3 picked up immediately after the events of DD2 in NES world. Although it seemed that Jimmy Lee wasn't around this time to share his adventures with Billy Lee, I think he was still sore after what happened during the first installemnt in the series. Maybe this is why Double Dragon 3 finally revealed the name of its 3rd Lee brother, Bimmy Lee, as the one who helped Billy in the previous game. Having cleared this up, I can only imagined how all started during DD3's storyline:

Jimmy and BIMMY Lee minded their own business, you know, walking down the street beating the pulp out of any other person, breaking bottles over the heads of

women with mohawk hairdos, sending homeless bums headfirst into trashcans, the usual. Suddenly, a elderly woman walks to them, distracting their busy pummeling.

"Aight! An old hag to beat up!" stated Bimmy as he tossed an unconcious guy to the floor. Just as he was about to pummel her, the old hag mentions that Marian has

been kidnapped yet again. Jimmy steps in and demands who the hell has she's been kidnapped by this time, being that he just can't leave her alone for one game without some guy picking her up. The old hag grins in sa mischieveous way and tells him that if she is to tell them where she is, that they must help her hunt down for 3 gems around the globe.

"Fine, but after we do all this we'll beat the crap out of you, granny!" Bimmy said, the old hag chuckled, and they proceeded to find about the stones that seemed to have nothing to do wth rescuring that whore Marian nor it would make sense that all of the sudden, the old lady would appear to let them know where to find her in exchange of helping her get some stones here and there. The question was where to go from here, and who would give them a lead to start looking for said stones. Bimmy and Jimmy had a notion that the fat guy down the alley had something to do with it, because he looked at them funny when they walked by. After kicking his ass, it became clear that he didn't seem to have anything to do with the dissapearance of Marian, nor he had one of the stoens the old hag was looking for.

"You idiots!" the hag retorted, "I was about to let you know where to find the first one, but you just ran off to beat some drunken bum down the street!" fuming, she walked past them to the airport to get first classs eats to China. Surely, the old hag would know that in the gem would be hidden right there in that country, and not somewhere else. Along the way, the Lee brothers will encounter allies such as a fat chinese guy and a ninja that had nothing better to do than to wait for two guys to come in and ask him to find some stones. Problem is, they had to be beated to a pulp in order to be asked for help, just like any other time you would need the help of another person to find a stone.

After so much trouble, the hag confesses that she had the final stone all along, and they were just being her bitches from the beginning. That being said, she ordered the foursome fearsome to go to Italy to beat another bum wearing a diaper as am eans to prepare for the final battle. The guy just happened to be homeless and living inside an empty space in the Colosseum, mind you, but Bimmy was excited to kick the hell out of him because Bimmy's a bastard.

Finally, the group fly to Egypt to find out just what the hell's going on. After beating some tourists here and there, the hag turns traitor and tries to go into a hidden chamber using the stones. That didn't worked out so it seemed, because she forgot to bring the stones along as she opened an ultra secret door. Bimmy felt bad when she turned into a pile of salt.

"Damn, I really wanted to kick her ass." They all laughed at the notion and then procceded inside said chamber.

Once inside, the group faced a couple of mummies and then a girl dressed like Cleopatra. She tried in vain to distarct them by shaking her tits, because they all weren't interested in getting some hot, egyptian booty, they just wanted to kick the hell out of her, staying true to the Double Dragon cred. Once she was turned to a puddle of blood, Bimmy and Jimmy rescued Marion, and then flew back to the US, while making plans for future beatings on he elderly and the handicapped. As for the fatguy and the ninja, they opened their own business at the flea market selling body parts of the guys they mutilated with their weapons. The end.

BACK TO DOUBLE DRAGON!
BACK TO GAMING STUFF