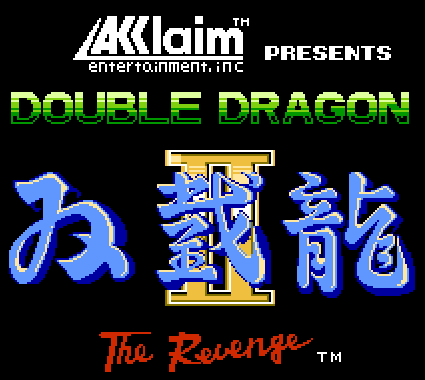 Double Dragon 2 was the definite favorite of the three games ported to the NES, period.

The mother of all sequels in the Double Dragon series, Double Dragon II is one hell of a game. Period. It surpasses the gameplay from its predecessor. For one, the cooperative Two-player feature that was missing in the first game has been glorified in this game. Although it isn't an exact port from the Arcade, DD II has made up for the lack of power that NES would need to have a perfect port, such additions for the console include:

A myriad of moves that can be used to annihilate any other SOB that dares to be in your way, including the infamous hurricane kick, an uppercut to send your opponents out of your face when knocked down, a flying knee attack, and various ways to bash your enemies' face while kneeing them in the groin...

...and the ability to knock the pixilated pulp out of your sibling from time to time.

Cutscenes that make up for the in-between stages missing from the Arcade. It unfolds the story of how Billy and Jimmy track down the vermin responsible for killing Marion. While this is a nice touch, some of its dialogue really needed adjustment. Oh well...

Even though the one-upped home version has its ups, it also has its downs, for example, there are certain stages where fisticuffs alone can't do the job, the game turns into a Mario clone, with traps and spiked floors where jumping must be timed, otherwise is one life less for the Dragons.

The variety of enemies here are diverse, although most of them do the same thing, and some even look like clones of celebrities.

Mr. Governor of California might've gotten some paid contribution for his cameos. You also have to deal with stick fighters, fat mutants, and even Ninjas before you fight the last guy, which looks like Fabio with an eccentric cheap magician complex...and bad grammar.

Is it just me, or these guys go trough a lot of hell just to avenge a woman? Was it necessary to make this game such a huge drama-acting sequence? Well, at least the gameplay makes it up for its little imperfections, whichdon't annoy at all, but make no sense either way.

The Music is nice, no bleeps or one-key Cassio bashing at all. Sound effects are a-ok by me as well, it is fun to hear a liquefied *swoosh* after sending the bad guy to his bloody doom.

No matter how corny the story and some stages are, the game itself rules over its predecessor, and quite frankly, it is par to the likes of River Ransom City, which is a huge comparison seeing that the same company was involved in its creation as well. Double Dragon II is the sole fighting game worth collecting of the three, no argument about it.

BACK TO DOUBLE DRAGON!
BACK TO GAMING STUFF