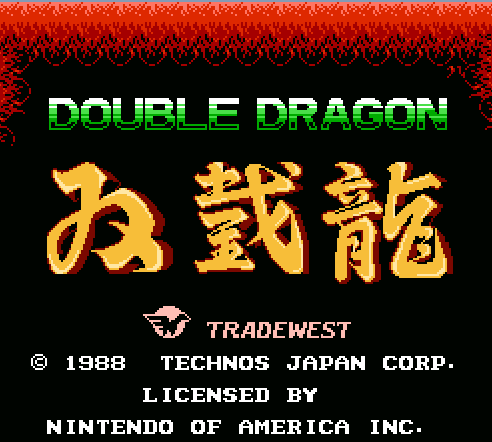 Double Dragon started the complete "Let's make an NES version of the Arcade, without the exact likeness of the original! thing. Not many complained about it however, and it got to be one fantastic game that was ever hard to put down once you got into it. Well, for those who nitpicked about it, they should realize that Niontendo often 1-up'd evry other convertion of Arcade games when it hit their console. I wonder what would've happened if there were an uproar at the time when DD first came out. Hey, no DD3 would've been a sure thing about it.

It all began a long time ago, when damsels in distress could do nothing mroe than being punched in the gut and then carried away by the bad guy, wile our hero would go and fight hordes of ugly-looking thuigs in order to rescue her again. Billy Leewould trek throughout a city, a factory, a forest, then into a cave where the bad guys were hidden to kick the hell out of the one responsible for kidnapping his better half. He would have to avoid deadly traps, henchmen with different weapons, a big, green guy, nd finally, some dude carrying a machine gun to meet the one responsible for the entire odeal, namely, his twin brother Jimmy Lee. Sibling rivalry was never so intense as this.

What separated the Arcade version from the NES port was the fact that Double Dragon was not a 2-player co-op game, and you would have to punch and kick your way to gain experience points in order to gain special moves like the famous back elbow and the knee-to-face manuever. Yeah, pretty much, you couldn't even jump kick a guy until you had enough points to do so. Why was an RPG element set into a brawler was always beyond me, but it was kind of entertaining gaining any other move that micmiced the arcade version.

To compensate for your efforts, a variety of new moves would be implied to the NES conversion. Namely, the ability to straddle your opponent and bash your fists into his skull until they were pudding. Not sure why every time I did that, it made me feel uncomfortable.

The level design was greatly altered, making it hell for Jimmy to go through a variety of obstacles just to rescue that damn whore of a gilrfriend. It reminded me of a certain game where you had to go through the same kind of hell but the only thing you had to go for was a cheap armor and a pair of boxers before you were turned into a pile of bones for a thousand and one times in the same stage.

One clear dissapointent was that although you had a 2-player option, people would have to take turns beore getting into the action. Yeah, kinda like the first Super Mario Bros. game. This was quite ludicrious being that the boxart of the game featured the two brothers giving hell to the bad guys togheter. Another feature to compensate for this was the "street fighter" mode that allowed you to go one on one against another player (or the computer) by using the ame character ina small colliseum-like place. As entertaining as this was, you could not choose your own character to face off against the other, that is, if you chose Jimmy as your character, your opponent would be Jimmy as well and so on.

Another annoyig factor of hte game was that you could never got to keep yoru weapons after you turned your foes into a bloody mess. Everytime you picked up a barrel or got a baseball bat, they would disintegrate as soon as you advanced to the next section of the stage. This would become the standard in the NES sequels to follow, and one that was quite frankly, stupid.

Althoguh the extra sections and some other additional features that seemed to be excuses for not making a moderate version of the Arcade, Double Dragon stood out among fans and gained much popularity as one of NES classics in the history of side-scrolling fighting. Nothing wrong with that,i t just felt that this wasa total different game based on the original, and nothing to state that it followed the original storyline of the franchise. Oh well.


BACK TO DOUBLE DRAGON!
BACK TO GAMING STUFF