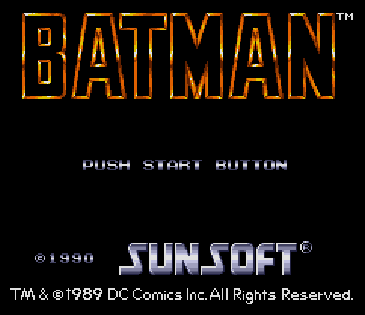 The Genesis versions featured a lot more from the movie
than in the NES, but it still lacked that special something to make it cool.

Not too long after Sunsoft released bats on the NES, Sega players were treated to a 16-bit version of the game. However, this game did follow the movie in terms of plot, game design, and even added more of Vicky Vale here than the NES version ever could have dreamed of.

Plus, you got to use the bat-grappler, which was a life-saver many times.

Your assortment of bat-weaponry is VERY short here, think batarangs-only short. Also, Batman can somersault in the air, but it does little to avoid enemies and such. One curious thing about this jumping business: Batman can decimate enemies with his feet alone, makes me think he had help in treaining by Mario himself.

The graphics, as expected, are clean and sharp, with music being only at average level.

Even though this version follows closely to the movie version, I can't help to feel that it was a bit hollow, and that the NES version had a better chance of being better. I am not sure why this is, since Batman in the NES was a pain to play with most of the time.

"Where does he get all
those wonderful toys?!"

BAT-GRAPPLING ACTION- The Sega Genesis version has a more movie-inducing feel to the game, but it lacks a bit on the whole Batman thing. As to why, it is still a mystery.