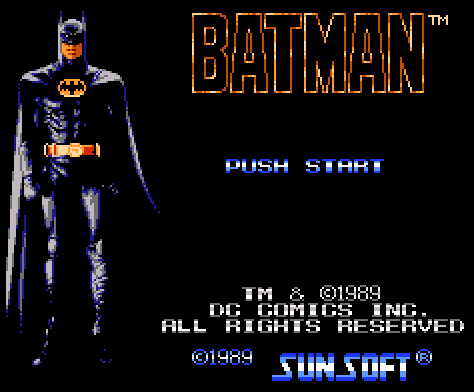 Batman, the Dark Night comes to your NES, and wants to know why his
appearance here was a painful one.

Have you ever danced with the devil under the pale moonlight?

Chances are that you would prefer to do so instead of taking the pains of going trough the grimacing level designs of this game.

Batman was one of the greatest Comic Book movies from the late 80's, and sparked a new way to see the Dark Night with all those wonderful toys.

This game is anything but an accurate adaptation of the movie, since every enemy you encounter here does not even resemble

the thugs hired by the Joker in the film, and most stages after City Hall and the Axis Chemical Plant are completely unrelated to the storyline.

If anything, the only characters recognizable here are The Joker and Batman. Vicky Vale is mentioned, but she doesn't even make an appearance to get her cute butt saved. The only way you can tell if this is an adaptation of the film is because of the cutscenes between stages, and even then, they feel more like jigsaw puzzles rather than re-telling the plot of the movie.

It feels more like an alternate dimension where The Joker is this big dominating figure and has complete control over the city, filling its streets with thugs equipped with flamethrowers, land mines, and even assholes with jetpacks. As if this weren't enough, the dark knight also has to deal with mutants, huge machines spewing fire, and even Ninjas.

Is the frustration the gamer suffers through the game worth it just so Batman can get his revenge on the Prince of crime?

The graphics are clean, sharp, beautiful and dark. This version of Gotham City feels more like a fortress filled with every possible obstacle to stop Batman from reaching his goal. Batman's design is great, despite that he is a one-tone smurf here. His cape moves a bit whenever he jumps, which is not much, but a nice touch nonetheless. Even Bats dies in fashion: He combusts into a batsignal.

It's just too bad the game does not features the bat-grappler, it's one of those little wonderful toys that could make this game less frustrating to play.

As for the music, its expectacular. Not many 8-bit games have such a nice array of BGM's (not counting Castlevania II) as this one does.

Points to the graphics, music, and theme of the game, but jeers to the level design, and the difficulty of it. If at least there was a difficulty option, I could enjoy the game a lot more.

I bet Batman felt so damn good when he finally beat the crap out of the Joker in the end, he sure deserved hell thanks to the gray hairs I received while getting to the last stage. 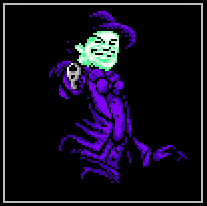 THE JOKE'S ON YOU-Batman for the NES was a pain-filled trip, but you will still play this game because, face it, its BATMAN.