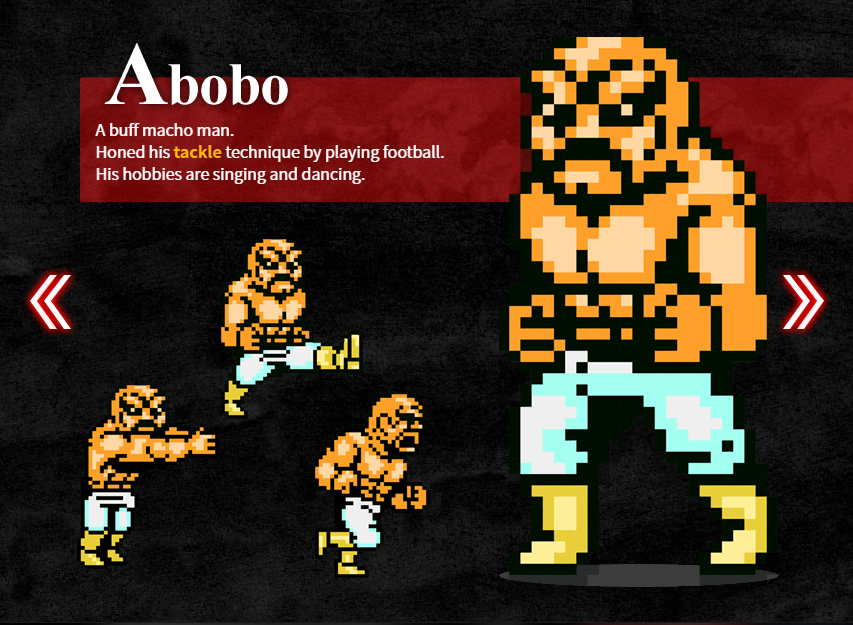 Abobo, the strongest there is. An icon on his own right since the beginnings of Double Dragon, Abobo is one of the most recognisible gaming villains you had heard around, when you think Double Dragon, Abobo comes to mind immediately and with good reason, although not very bright, Abobo is a powerhouse who should not be taken lightly, especially when bursting through walls and tossing you around like an empty can of beer without much effort.

He makes his menacing appearance in the first Double Dragon arcade, demolishing walls and making mince meat out of you should you not get out of his way. Variations include white, black, and even green, with the latter two resembling Mr. T, something I am sure was fairly intentional. Even though he was apparently absent from Double Dragon II, his light skin alt Bolo came back sporting fabio hair and a pair of jeans. Probably got into country music just as well. In the NES versions of both games Abobo is as menacing on his 8-Bit sprite as he is anywhere else, and when a pair shows up he seems to be twice as brutal. He also would be the first boss in the Gameboy iteration and brother, he cannot even be knocked off wit ha jump kick. I easily lose a life when confronting his mightyness in that port. His appearances also come in other ports like the Sega Genesis, Master System, Atari 7800, and other few consoles which the first game is featured. 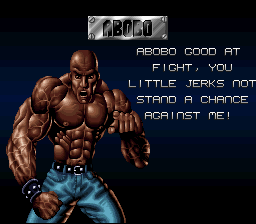 Abobo would not make an appearance in the sequel that followed after II, but he was not forgotten either. In Battletoads and Double Dragon he's the very first boss you fight against and if you are dumb enough to let him, he'll pulverize a whole life in a single barrage of punches. He is not that difficult to beat being the first boss, but you should be smart not to let him catch you off guard either. 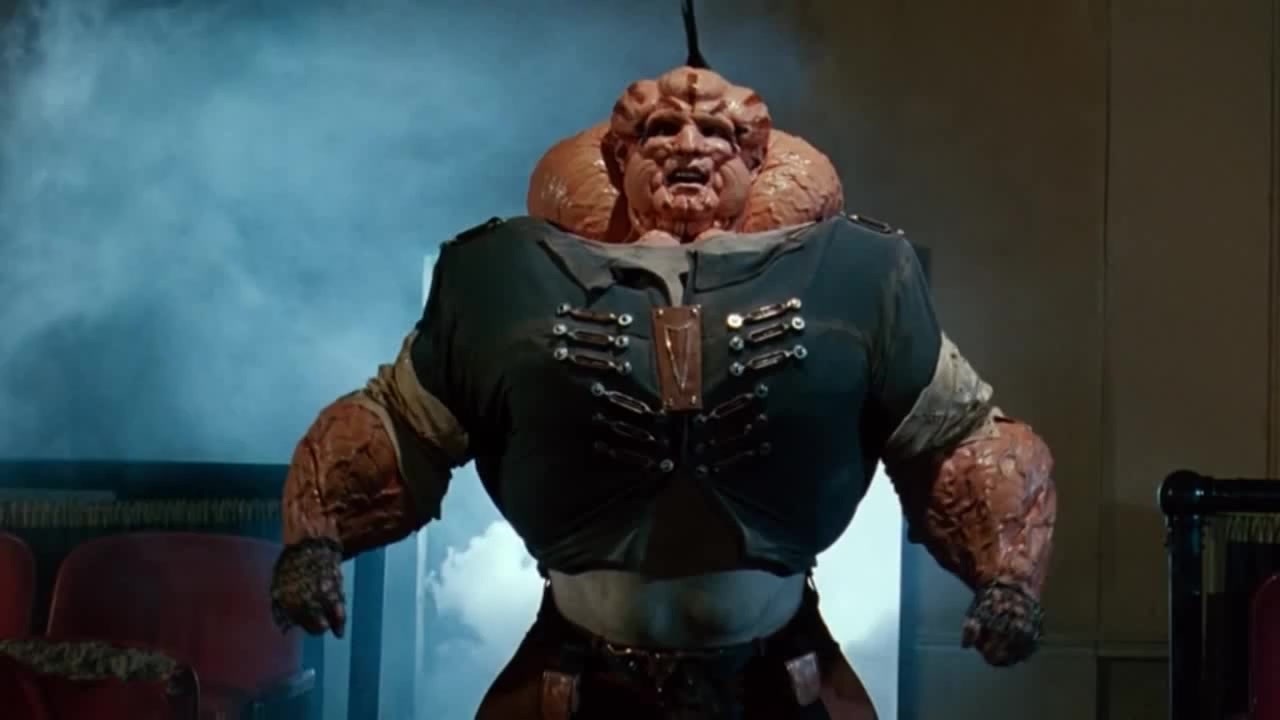 Abobo would also make an appearance on the movie and cartoon versions of the fabled gaming series and while they are not very spectacular, its still pleasing to know he is remembered. I guess. The movie shows him as a tall, dumb Mad Max ruffian reject who later becomes a disgusting pile of flesh thanks to a mutation done by the movie's villain. He would then become buddies with the Lee brothers and drive off to the distance without ever doing much than becoming comic relief. In the cartoon he is a bad guy working for the Shadow Boss (Then being Billy Lee) but by the second episode he is discarded to the wall of losers and never heard from again. There was just no love for him on other media than gaming. He was also added as a fighter in the Neo Geo fighting game based on the live action movie and seems to have this unhealthy obsession with eating meat till his gums bleed. 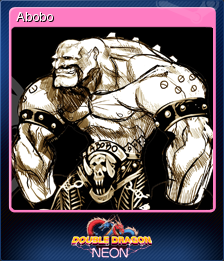 Abobo would be last seen in the latest Double Dragon games Double Dragon IV and Double Dragon Neon, the first using its NES sprite in a new story while the latter he is as big and bad as he's ever been under the command of Skullamegon. 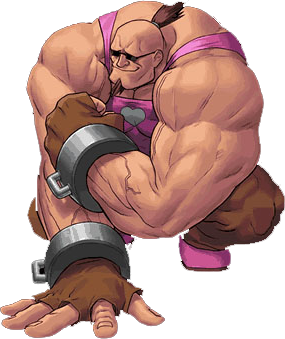 Another appearance which is not exactly direct was in the fighting game, Rage of the Dragons as Abubo, leader of a section of the city the game happens to take place on. One of his alt include him donning the green skin from the first game. One more appearance he makes is in the excellent GBA port of Double Dragon Advance, which he dons new powerful moves and a more rugged look as well as some nifty haircuts and various skin colors. In the Atari 2600 port a pair of Abobos are the final boss to said game and make a sounding roar as you defeat them. 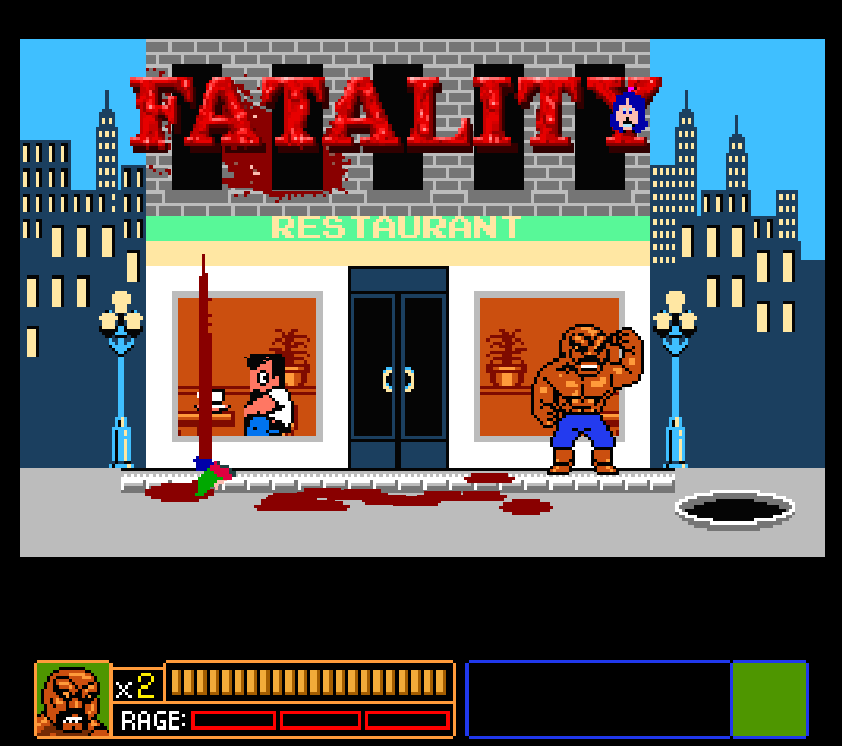 On the fanmade flash game Abobo's Big Adventure he becomes the main character and punches through various opponents in a variety of platforming stages each based on different games featured in the NES in search for his kidnapped son. On his way he meets a mermaid and creates a family while he seeks his own child. Abobo sure keeps himself busy here.

And this is by far his excellent violent adventures, Abobo is quite simply, one big badass.