The Sega 3: 3 games on the Genesis that had questionable changes over the Originals

At times, I wondered if game developers actually thought before they would go ahead and crate a port of an arcade game, or say, a sequel to a smash hit videogame that spawned from the Arcades. I admit though, while some have actually succeeded into making an arcade conversion something better than the arcade itself, others have dropped off hard in the land of disappointment. Sega Genesis had some good ports during the 16-bit era, but at the same time, it had its lame moments just as well. The saddest part is that some of the following games were not only butchered Rembrandts of their arcade counterparts.

Some of the arcade versions translated were also created by Sega.

That was enough to make me cringe when I tried the home versions, nonetheless, some of them weren’t TOO bad, but made me realize I had missed what could’ve been a good arcade version during the reign of the 16-bit era. 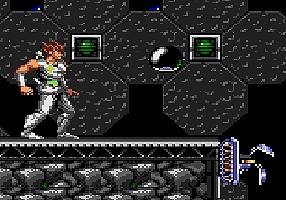 Anyone who was lucky to have a carbon copy version of the Arcade hit in their Genesis experienced a badass game of a Ninja in the future slashing through metallic nasties, pirates, and healthy amazons. Strider ignited a fan base that still reigns today thanks to his appearances in fighting games like the Marvel vs. Capcom series. However, during the 90’s fans often wondered if Capcom would grace them with a sequel to this amazing game. As it turns out, their wishes came true, but Capcom had nothing to do with it at all. US Gold bastardized the game and put together a stock pile of sprites and images from the original game, combining them with a plot that included rescuing Strider’s girlfriend from the clutches of the Grandmaster. Comes to show, be careful what you wish for, it might just come true.

The only thing saving Strider was the fact that Capcom created a true sequel, and was kind enough to let the US gaming fans have a PS1 port of it. Phew. 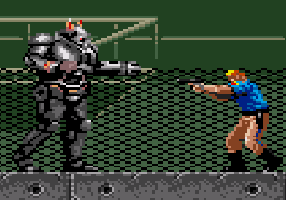 You know, the Arcade named E-Swat was a nice action platformer. While Data East had the rights to the Arcade adaptation of RoboCop, Sega decided to create a cyborg cop of its own and tossed a 2-player co-op to deal with 20-foot gorillas, monster trucks, mad scientists, and grenade-tossing girls in purple spandex. The Sega Genesis version still had the same cop wearing a cybernetic suit (dubbed “Ice-suit”), but the similarities ended there. Before you even got to the point where you were given said suit, you would have to deal with robots using an automatic pistol. Amusingly enough, human enemies would keel over and explode with a single bullet, and you could deflect Vulcan-style shots from killer robots just as well. Makes me wonder why the hell the main character needed said suit if he only gained the ability to fly for short periods of time. 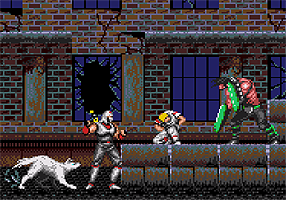 Shadow Dancer : The Secret of Shinobi

Just like E-SWAT, Shadow Dancer was chopped down to a home version with tiny references from the arcade counterpart. While the Master System had an 8-bit translation of the Arcade, the Sega Genesis reworked the storyline our fellow Ninja had to deal with an ultra secret organization called the Iron Lizard, who, like all evil organizations in videogames, went on causing havoc by destroying cities and kidnapping blond people. Even with such changes, gameplay was as close to the arcade as it could ever be, sending your faithful dog to maul some hapless ninja guy while using your shuriken to stab them in the eyes. Oh, let me remind all ye, Sega also made an immediate sequel to the original Shinobi, meaning Shadow Dancer was just a side story and might as well been never a part of the entire Shinobi thing. Maybe this was the reason to call it a “secret” after all. Although Shinobi 3 was a fine, fine game and a desperate cry to finalize the Genesis 16-bit days.

One day, Sega will make a compilation of its Arcade classics, and maybe just then, I will be able to experience a nice, direct arcade portable of a ninja and his dog down the road deactivating bombs as their hobby.